Book: Constructing the American past

The Great Depression left millions unemployed, homeless, and in need of assistance. Because of the lavish spending, the deregulation of the Stock Market and Banks, Americans were pulled in to the worst economic depression ever. Because of President Hoover’s inability to help, Americans turned to Democratic challenger Franklin Delano Roosevelt. His huge win led to vast economic and social changes that helped Americans cope with this era (minimum wage, social security, infrastructure jobs- like here in San Antonio, the river walk, Breckenridge Park, San Antonio College, etc…)

Read the intro to the chapter, then read documents 1 and 7.

Based from the documents, how did the Great Depression affect Americans? What were some Americans’ views on immigrants and minorities (including women) during the Depression? How were women affected by the Depression? Should the government help Americans during economic crisis? Explain.

Pics and videos below!!!!

Americans were fed up with President Hoover… . This electoral map of 1932 clearly shows the nation was ready for a new President. 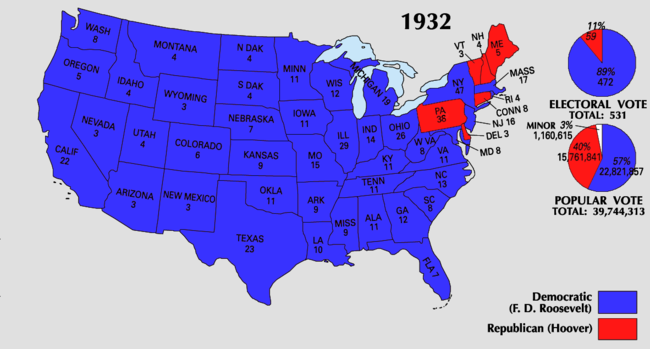 Because of FDR’s presidency during the Great Depression AND World War II, he felt a second Bill of Rights was needed for middle class Americans. By adding these new rights, FDR felt these new rights could help Americans for the future ( the dude was totally ahead of his time, and brilliant for these ideas). Unfortunately, these new Rights would not progress, as FDR died soon after.

5 min. clip on the homelessness and struggle of the Great Depression:HOBO DOCUMENTARY 1920’s (Links to an external site.)

video on “Hoovervilles” and despair:

https://www.youtube.com/watch?v=k53rXMAbq3I (Links to an external site.)